“Driving back from Ellsworth today and this came up on the ipod. I’ve always thought that many a truth is spoke in jest and this qualifies nicely.
For some reason it makes me think of “The Blind Men and the Elephant” that ends:
“So oft in theologic wars,
The disputants, I ween,
Rail on in utter ignorance
Of what each other mean,
And prate about an Elephant
Not one of them has seen!”

Having grown up in a holiness church and witnessed the pandering and putting-ons of many a church member, this song has always put a smile on my face, yes, it’s greatly exaggerated but isn’t that what makes good comedy?

As for Ray Stevens, we”ll be visiting with him a few more times along the way.

Another favorite from the distant past ? Summer of 1971 this song spent 5 weeks on the Billboard charts but only peaked at #74. An English band with otherwise strange musical tastes, this has always put a smile on my face. Mary isn’t excited about it, probably because of the chorus line that says “Friends say we aught to marry, I smile and shake my head. One wife will make you happy, 2 will make you dead” Actually Mary is number 2 and if she stays around until I’m gone, I will be happy. ? Very catchy tune!

I am happy to report here in January 2017 that Mary is still hanging out with me and so far I’m still alive and doing quite well.

Audience was a British “art rock” band, all the members had met in a semi-professional soul band named “Lloyd Alexander Real Estate”. I assume that the name refers to the American author who wrote the 5 book series, “The Chronicles of Prydain”,in the mid 60s, read and enjoyed those many moons ago. But that may just be free association and not the gospel truth.

Back to 70’s “druggie music” ? A one hit wonder from Ashton, Gardner, & Dyke that spent 10 weeks on the Billboard charts in 1971, peaking at #40, another band from England with a devil may care approach to music. If you are a fan of this song, check out this video from youtube, you’ll be pleasantly surprised at the Tom Jones version that I didn’t know existed until tonight (not the world’s biggest TJ fan here).


“Put out your tongue
Put your head in the air.
Make a “V” sign
And you just don’t care.
Now you feel free
You gotta loose control.
All Gods children gotta
Little bit of soul.”
As I ‘m posting this in 2017, I’ll add another version with the same intro, I didn’t know this existed til today, but I am an Osmond fan:

The first half of 1967’s music were the recent oldies by June, so I’ll highlight some songs from the charts 50 years ago as I re-visit that year. Nancy Sinatra had already reached the top of the charts with “These Boots Are Made For Walking” in early 1966, she added another top 10 hit “How Does That Grab You, Darlin'” later in 1966 but my favorite Sinatra song held the #5 spot on the charts for 3 weeks at the end of 1966 and beginning of 1967. Definitely a light, fluffy tune with no socially redeeming value,but a favorite nonetheless. “Sugar Town”

That was my Facebook post of January 2nd,2017. My goal for 2017 is/was to post at least 400 1967 songs as they appeared on the charts that year as part of a 50 year anniversary of the “Summer of Love”. 1967 was the year I turned 15, but not until the last 10 days of the year so I spent 1967 as a 14 year old. When the year started I was still listening to my Dad’s country music, and you’ll see that well represented here on this blog, by June, I was making the transition to the rock and pop music world and it would be the center of my life for the next 5 years. So that’s why I’ve created categories for the music of 1967 and 1968. I’ll try to keep it all fairly spread out but if you don’t read this blog until I have a lot of entries, you’ll have plenty of genres and years to choose from.

Nancy was 26 in 1967 and her people took advantage of her sex appeal to promote her, not that that is anything that never happened before. She will be turning 76 this summer (2017) and I am 64 but in my mind’s eye she will always be 26.

Southwest F.O.B. from Dallas, Texas gave us “Smell of Incense” in October of 1968. Another entry in my druggie music hall of fame ? The surprising thing here is that the vocalist is Dan Seals and the keyboardist is John Coley. Later they would combine as England Dan & John Ford Coley and provide a number of “mellow” hits like “I’d Really Love to See You Tonight”, “Nights Are Forever Without You” and my favorite “It’s Sad To Belong”. Dan Seals had a string of #1 country hits in the mid-eighties, including “Bop”. And one last connection, Dan’s brother Jim Seals was the Seals in Seals & Croft. In 1968, I didn’t care about any of that, “Smell of Incense” was one of my favorite songs with that rolling keyboard melody used as background and between verses.

January 2017 – Still one of my very favorite songs, I did discover that the Southwest F.O.B. “swiped” this from the West Coast Pop Art Experimental Band, here is their version:

It has it’s own psychedelic feel to it with an extended instrumental section in the middle.

The Shape Of Things To Come – Max Frost & The Troopers

‎”Wild in the Streets” was the movie, Christopher Jones played the lead role of Max Frost. This song was made in-studio written by Barry Mann and produced by Mike Curb and released as a single by Max Frost & the Troopers. It spent 12 weeks on Billboard’s Top 100 in the Fall of 1968, peaking at #22. Less than 2 minutes long, but between the “revolutionary” theme and the hard hitting rock sound, it became a real favorite of mine. For more on the movie:

Wild In The Streets

Christopher Jones had been the lead in ABC’s Jesse James, which aired 34 episodes in 1964-65 and was involved with Sharon Tate before her death at the hands of the Manson family. He died at the age of 72 from gallbladder cancer.

Found this one looking for something else, then discovered it’s not in my iTunes collection, which is sacrilege! This song was part of the musical version of “The War of The Worlds” in the late 70s. It is Justin Hayward, lead singer of the Moody Blues, and it is a plaintive, beautiful piece of music written by Jeff Wayne, Paul Vigrass & Gary Osborne. It charted for 13 weeks in the winter of 1978 and peaked at #47. Vigrass & Osborne had released this as the flip side to their one US charting hit “Men of Learning” in 1972, another of my all-time favorite songs.

“Forever Autumn” is a song written by Jeff Wayne, Gary Osborne and Paul Vigrass. The original melody was written by Wayne in 1969 as a jingle for a Lego commercial. Vigrass and Osborne, the performers of the original jingle, added lyrics to the song and recorded it for inclusion on their 1972 album Queues. Their interpretation was also released as a single and gained moderate commercial success in Japan, selling more than 100,000 copies and becoming a top-20 hit on that country’s record chart.The best-known version is the recording by Justin Hayward from the album Jeff Wayne’s Musical Version of The War of the Worlds(Wikipedia).

Posted this back in July of 2009, it’s a plaintiff, beautiful piece of music. Vigrass & Osborne released this as the “B” side of “Men Of Learning”, that ended up as my #1 song of 1972. More on that in another post. 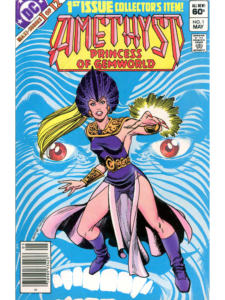 I’m a big comic book fan, at one time I had about a 3000 issue collection before my wife at the time decided I needed to sell it. One of my favorite maxi-series from DC is Amythyst, Princess of Gemworld published in 1983 and 1984. The premise about a girl coming of age and discovering her real identity and fate is tempered well with the magics and powers of the gems. Ernie Colon’s stylized art is awesome in this set of comics. The character continued on in a 16 book series and again in a 4 issue mini series but this original series is the best.

Here’s another example of Ernie’s art: 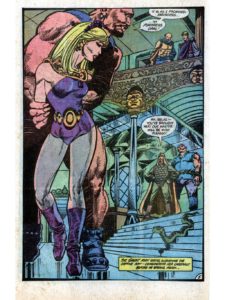 “Coming back from St. John listening to my late 60’s, early 70’s music that I play at maximum decibel level when Mary’s not around – she refers to a lot of it as “druggie music”. Here’s one that wasn’t a huge hit (11 weeks on Billboard’s top 100 peaking at #65 in February of 1972) but always makes my feet tap, and my head bob.  ”The music has no sorrow, I bring it free and clear, if you will accept, it will bring you…cheer!

By way of explanation, Mary is my wife and St. John is the New Brunswick, Canada version. Seven years ago I lived in Calais, Maine, now I hang my hat in Driggs, Idaho and that’s a story for another time.

Potliquor originated in Baton Rouge, Louisiana. The author of the song was keyboardist and lead vocalist George Ratcliff. The group produced 4 albums of material but only managed this one charting single. They are now members of Louisiana’s Entertainment Hall Of Fame. After their breakup, George returned to his gospel roots in a group named Legacy.

The group’s name was derived from pot liquor, the broth left behind after cooking vegetables which was often drank or used in soups or stews.